Break Up the Four Horsemen of Banking

Earlier this week Senate Republicans unanimously blocked floor debate on Senator Chris Dodd’s (D-CT) Banking Reform Bill in a 57-43 vote. Perfect. Now they are on record as the wholly owned subsidiaries of Wall Street we always knew they were. Now is the time for House and Senate Democrats and the Obama Administration to up the ante. They should go on the offensive, drag out the debate, put real teeth into this bill and continue to allow the Republicans to stand shoulder to shoulder with their banker pals.

A key sticking point for Republicans is that the current bill would require the mega-banks to spin-off their derivatives hedge funds. Give me a break. The bill should go much further. Derivatives were created by the Wall Street banks and should be banned forever. The commodity futures markets which these same banks control should also be shuttered. And the six international banking houses which now control 60 % of US GDP should be broken up.

In my book, Big Oil & Their Bankers…, I coin the term, “Four Horsemen of Banking”. These banks- Citigroup, JP Morgan Chase, Bank of America and Wells Fargo- have dramatically increased in size through a frenzy of acquisitions and mergers beginning in the 1980?s. 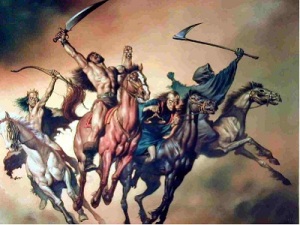 Any banking reform bill worth its salt needs to use existing anti-trust legislation to break these mega-banks up into these former subsidiaries. It also needs to re-enact the Glass-Steagal Act of 1933 and the Bank Holding Company Act of 1956, which will prevent these banks from becoming ”too big to fail” in the future.

As for the other two of the six mega-banks- Morgan Stanley and Goldman Sachs- their assets should be seized. A 60 Minutes investigation showed that these two banks single-handedly ran up the price of a barrel of oil to $150 in 2008 through manipulation of the New York Mercantile Exchange. They then drove up food prices in a similar fashion. This type of parasite financier casino capitalism endangers the public good and destroys economic wealth. It cannot be tolerated in a democratic society. Proceeds from the seizure of both Goldman and Morgan Stanley can be used to pay down the deficit.

Many progressives think that Obama needs to draw from the FDR toolbox in handling this crisis. The re-enactment of Glass-Steagal would be a good step in this direction. But what Obama really needs to do is to take his cues from the other Roosevelt. Teddy was a Republican, but was one of the greatest Presidents this country has seen. Because he was a Trustbuster.

He went after the Rockefeller/Rothschild Big Oil monopoly which has now re-formulated. He went after the Ma Bell telephone trust, which has also re-organized. Passage of the Sherman and Clayton Anti-Trust Bills during his time gives us the tools even today to begin to go after the Trusts of the new millenium. And there are many.

Let’s start with the banks!

About the author:
Dean Henderson was born in Faulkton, South Dakota. He earned an M.S. in Environmental Studies from the University of Montana, where he edited The Missoula Paper and was a columnist for the Montana Kaimin. His articles have appeared in Multinational Monitor, In These Times, Paranoia and several other magazines.

A life long political activist and traveler to fifty countries, Henderson co-founded of the University of Montana Green Party and the Ozark Heritage Region Peace and Justice Network. He is former Vice-President of the Central Ozarks Farmer’s Union and former President of the Howell County Democrats.

In 2004 he won the Democratic nomination for Congress in Missouri’s 8th District.

Big Oil & Their Bankers in the Persian Gulf…
https://www.createspace.com/3476183
http://www.smashwords.com/profile/view/DeanHenderson

Dean Henderson is the author of Big Oil & Their Bankers in the Persian Gulf: Four Horsemen, Eight Families & Their Global Intelligence, Narcotics & Terror Network and The Grateful Unrich: Revolution in 50 Countries.

His Left Hook blog is at http://deanhenderson.wordpress.com/category/left-hook-columns/
Dean Henderson is a frequent contributor to Global Research. Global Research Articles by Dean Henderson: http://www.globalresearch.ca/index.php?context=listByAuthor&authorFirst=Dean&authorName=Henderson