With the August 2nd debt ceiling deadline rapidly approaching, Congress looks poised to either pass a deficit reduction bill targeting the poor and middle class, or to shut down the government. At this point in this pathetic debate, I vote for the latter.

Obama and the Democrats, as per usual, completely adopted the framework laid out by the Republican Eight Families minions in the debate on raising the debt ceiling. Instead of advocating the repeal of the Bush tax cuts ($4 trillion in revenue over 10 years) – which have allowed the hallowed “job creators” to hire plenty of serfs (in China and India) while stashing their ill-gotten loot in Cayman Islands tax havens – the cowardly Democrats chose to start yet another negotiation with the party of the whining rich and climber classes by spotting the bent-over Republicans four touchdowns before the game ever began. 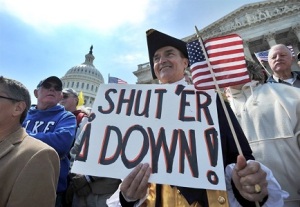 Americans have no one to blame but themselves for this fiasco. While the idiocracy this country is fast becoming piles the blame on Congress, they seem to forget that it was they who voted for the current batch of ignorant banker shills whose IMF-sanctioned mission is to destroy every vestige of government for the people and replace it will with rule by oligarchy.

Thomas Jefferson referred to government as a buffer between the aristocracy and the peasants. It is that buffer zone that the banker-funded Grover Norquist pledge-pin robots are out to destroy.

Yet the idiocracy grows, each day more inclined to bash “government” and thus democracy. Better we should have a King and a Queen and their East India Company. Let’s go medieval!

The Koch Brothers-funded and Orwellian-named Tea Party nut jobs, politically and economically much more aligned with British Empire mercantilists, are in fact a treasonous Anglophile lot who seek to destroy the United States as we know it.

They are backers of the class war which the aforementioned job destroyers have waged for decades on the American working classes. They defend billionaires because they lack a moral compass, because they have no values, because the only thing important to them is the banker-inspired money grab. Their ideology only exists to justify their exploitation of fellow human beings. They hold no higher values. They are not capable of empathy. In short, they believe in nothing.

Many are of the opportunistic contractor crowd and dependent on a government check each month. Thus, it is time for progressives to call their pathetic, ignorant and hypocritical bluff. It is time for the US government to default on its debt.

Yes, it will be terrible that the elderly, poor folks and veterans will not get their monthly checks. But think about what will happen to the rich and their climber whores, who feed covertly and incessantly at the public trough and whose government checks are much larger.

Lockheed Martin could go belly up. Blackwater will be out of business. Cargill will get no more government subsidized grain from wealthy farmers, who will get no more big welfare checks to pay off either Monsanto or their local fat cat banker.

US overseas military bases in 192 countries will need to be shut down. NSA, CIA, DEA, ATF and FBI thugs will be home watching CSI. Private prisons will go bankrupt. Local police departments will get no federal money. Their ranks will thin and their patrols will cease. Wealthy neighborhoods will grow nervous. Will those ostensibly fit rich folks survive, or was their advantage that their million dollar McMansions received extra “evil government” protection?

Medicare and Medicaid payments to Big Insurance, Big Pharma and Big Hospital will cease. Wealthy surgeons will have to sell their Mercedes, since legions of old white whining Republican hypochondriacs on Medicare will no longer get their government check to abuse.

Wall Street will crash and the 401K climbers will be wiped out along with the bondholders. The Federal Reserve – by far the largest holder of US debt – will see its power drastically diminished.

Most gratifying of all, Michelle Bachmann, Eric Cantor, Rand Paul and rest of the “can’t do” return America to the Stone Age contingent, will be cut off the “evil government” dole.

Message to Obama and the Democrats: Don’t agree to a deal which targets the poor, when the top 10% in this country – well-fed by, yes, the GOVERNMENT – control 90% of the wealth and pay a smaller percentage in taxes (when state & local are included) than the poorest people in this nation. It would be an outrage!

Better to shut the “evil government” down, watch the heavily-subsidized rich squirm, and teach the climber idiocracy a hard moral lesson about the role of government, the merits of democracy and the lost virtue of empathy for those who have less than your whining white well-fed self.

Incognito Says: July 31, 2011 at 3:03 pm
They will not shut down the “government” because it is their instrument of control. They control the media so it is impossible to tell the truth to the people. The only way is for more and more people to have nothing to lose and lose it. That is why I agree with the “entitlement” cuts propaganda; they’re playing with fire.

I know what you mean about poor people not paying for bankster garbage but there is no other way that I can see. A million people burning down CONgress and the White House should do the trick.

Don Says: August 1, 2011 at 12:42 am
Funny how the liberal president threatens the public, (we are all poor) as though they don’t have enough money. Its been repeatedly shown they have plenty of taxes to meet the interest payments, ie no default. Its all theater. I lve how they say we cut a trillion, but what they didn’t say the proposed budget went up something like l.8 trillion. Funny math, they just passed a budget that increased it debt.

They stole our SS since LBJ, a long time now. There plenty to cut, start with the war machine and end with the abolishment of the Fed and Central Banks. There you have it the key to unite the left and the right. The real left and the real right that is.

Billy Says: August 1, 2011 at 12:56 am
“The real problem, you see, is that our money supply is a counterfeit currency system run by the Fed, which refuses to be audited and answers to no one. It’s not even a branch of government. It’s just a bunch of private global banksters running our money supply who are so arrogant that they refuse to even disclose where they’re sending trillions of dollars.
No wonder the dollar has lost 97% of its value since 1913 when the Fed was first created. As China recently said, we’re already in default!”
copied from Naturalnews.com email.

opus diablos Says: August 1, 2011 at 6:28 am
Er…burning down Congress….you mean like they did the Reichstag?Be careful what you wish for.
I like the line ‘…NSA, CIA, DEA, ATF and FBI thugs will be home watching CSI..’.
But do be mindful that the nihilism of post WW 1 Germany, and justifiable disgust with the Weimar inadequacy, led to even more monstrous outcomes. Perhaps thats the way its going, but I hesitate to push it.
I’m holding out for evolution a little longer, revolutions tend to magnify the terror.

About the author:
Dean Henderson was born in Faulkton, South Dakota. He earned an M.S. in Environmental Studies from the University of Montana, where he edited The Missoula Paper and was a columnist for the Montana Kaimin. His articles have appeared in Multinational Monitor, In These Times, Paranoia and several other magazines.

A life long political activist and traveler to fifty countries, Henderson co-founded of the University of Montana Green Party and the Ozark Heritage Region Peace and Justice Network. He is former Vice-President of the Central Ozarks Farmer’s Union and former President of the Howell County Democrats.

In 2004 he won the Democratic nomination for Congress in Missouri’s 8th District.

Big Oil & Their Bankers in the Persian Gulf…
https://www.createspace.com/3476183
http://www.smashwords.com/profile/view/DeanHenderson

Dean Henderson is the author of Big Oil & Their Bankers in the Persian Gulf: Four Horsemen, Eight Families & Their Global Intelligence, Narcotics & Terror Network and The Grateful Unrich: Revolution in 50 Countries.

His Left Hook blog is at http://deanhenderson.wordpress.com/category/left-hook-columns/
Dean Henderson is a frequent contributor to Global Research. Global Research Articles by Dean Henderson: http://www.globalresearch.ca/index.php?context=listByAuthor&authorFirst=Dean&authorName=Henderson