The Politician 2.0 and an introduction to post-Democracy

This is the second article to be re-posted on this blog from Gaianomy blog (A new socioeconomic theory & a think-tank). I encourage readers to visit their  About Gaianomy page.

The Politician 2.0 and an introduction to post-Democracy

We established in the previous blog Do we really need the Politician? that the politician as an institution needs to change and together with it, the institutions of the political party and public administration. 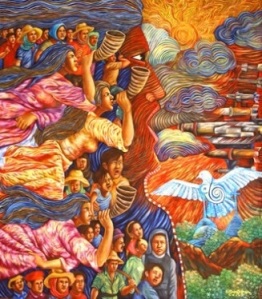 No to War by Bert Monterona Tapestry Painting

Where can we start the change?

Inevitably, we need to evaluate  the probable “futures” we can see, compare these with today’s reality and plan a phased transition from today to the future vision, with the minimum of “allergic” reactions, ideally. Equally important is to agree on the fact that no one solution can fit all, as different nations will start from different systems and institutional forms that support them currently so probably localisation of the principals will be needed.

So, “back to the future” and let us see how our vision of post-Democracy could be defined.

Based on current trends and having excluded several incompatible scenarios we can see it as:

So, how Democracy 1.1 can look like, what the first step can be to start the journey, from where we are, to where we would like to be?

We believe that societies are currently mature enough to:

Then sit back and enjoy!