Written by: Praveen Swami, New Delhi, December 29, 2011; and published by The Hindu newspaper.

Yusuf al-Qaradawi, a Doha-based Islamist scholar who once called on his followers to back jihadist groups in Jammu and Kashmir, has emerged as a key mediator in secret talks between the U.S. and the Taliban, government sources have told The Hindu.

In 2009, Mr. al-Qaradawi had issued a fatwa, or religious edict, asserting that “the Kashmiris were properly fighting jihad against the Indian army.” The jihad was legitimate, he argued, since mujahideen groups sought to create an Islamic state. Therefore, the edict concluded, it was incumbent on all Muslims to help Kashmiris gain their “freedom from Indian aggression.”

New Delhi, Indian diplomatic sources said, has been warily watching Mr. al-Qaradawi’s emergence as peace broker — fearful that his growing influence could help regional jihadist groups like the Lashkar-e-Taiba and Jaish-e-Muhammad find new sanctuaries in a rapidly changing West Asia or a future Afghan regime which includes the Taliban. 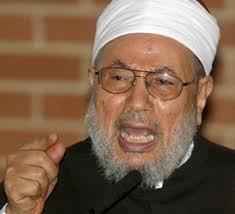 Earlier this month, the sources said, Mr. al-Qaradawi helped draw a road map for a deal between the Taliban and the United States, aimed at giving the superpower a face-saving political settlement ahead of its planned withdrawal from Afghanistan which is due to begin in 2014.

In return for the release of prisoners still held by the United States at Guantanamo Bay, the lifting of United Nations sanctions on its leadership and its recognition as a legitimate political group, the Taliban was expected to agree to sever its links to transnational organisations like al-Qaeda, end violence and eventually share power with the Afghan government.

Hamid Karzai, Afghanistan’s President, recalled his country’s envoy to Qatar after The Hindu broke news that negotiations to open a Taliban office had reached an advanced stage — angered, reports said, at the prospect of a deal that would have given Taliban legitimacy at a time when hardliners in its ranks are carrying out a lethal campaign targeting regime supporters. However, Kabul on Tuesday announced it would accept a Taliban liaison office in Doha — as long as the talks were “Afghan-led.”

Evidence that hardliners have increasing influence over Taliban decision-making, intelligence sources say, has been mounting. Earlier this year, for example, Sheikh Muhammad Aminullah — who was placed on a United Nations watchlist in 2009 for aiding acts of terrorism — was given command of its Peshawar shura, or command council. Born in 1973, Mr. Aminullah represents a new generation of Taliban commanders ideologically committed to al-Qaeda’s vision.

His predecessor, Maulvi Abdul Kabir, had only a peripheral military role, and was considered a key player in secret peace talks with the Afghan government and the United States.

The Muslim Brotherhood suddenly has chances

Egyptian-born Mr. al-Qaradawi is seen by both the United States and the Taliban traditionalists as an ally in the battle against the growing influence of this new generation of commanders. Expelled from his homeland for his Islamist views, he has emerged over the last year as ideological pole star of the Muslim Brotherhood — now West Asia’s most influential political movement.

In 1993, Mr. al-Qaradawi issued a landmark edict endorsing democratic pluralism; the Muslim Brotherhood later cast its embrace of electoral politics in Egypt and elsewhere as a form of da’wa, or proselytising missionary work. Even though Mr. al-Qaradawi said he remained committed to “the spread of Islam until it conquers the entire world,” he argued this could be achieved peacefully.

He condemned 9/11 and, in September, 2005, described the Iraqi jihadist Abu Musa’ab al-Zarqawi as a “criminal.” In a 2009 book, he defended armed jihad under specific conditions — Kashmir, Iraq and, later, Libya were among those cases he endorsed — but lashed out at al-Qaeda for a “mad declaration of war on the whole world.”

Mr. al-Qaradawi explained his logic thus to Der Spiegel: “The [Muslim Brotherhood] have tried [jihad], but [jihad] has not been helpful, and we have not gained anything out of [jihad] other than detention, suffering, and victimisation.”

The Muslim Brotherhood’s decision to embrace electoral politics incensed al-Qaeda. In 2008, al-Qaeda’s now-chief Ayman al-Zawahiri lashed out at the Muslim Brotherhood for accepting the Egyptian constitution, rather than God’s word, as a source of law — a fundamental betrayal, he claimed, of the precepts of Islam. In many countries, Brotherhood cadre clashed with salafi-jihadist groups sympathetic to al-Qaeda.

The west’s embrace of Mr. al-Qaradawi for its Afghan negotiations marks the restoration of an old, but little-known, relationship. Key Brotherhood leaders like Said Ramadan, the historian Ian Johnson has shown, were cultivated by the United States’ Central Intelligence Agency for anti-communist operations —along with several central and west Asian Islamists who fought with German fascist forces against the Soviet Union in 1941-1945.

Expelled by Egypt’s socialist rulers for his neo-fundamentalist views, Dr. Ramadan received a warm reception — and a radio programme — when he landed in Pakistan in 1948.

The Pakistani-Canadian scholar Tarek Fatah said Dr. Ramadan’s work “was instrumental in turning a secular Muslim country into a hotbed of Islamic extremism.” Dr. Ramadan also visited the White House in 1953, where he met with President Dwight Eisenhower.

Who Really Controls the World?

The Ad That May Kill the Next USA President