The European Union Is an Evil Plan 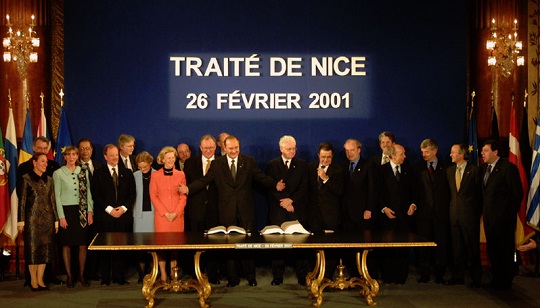 1986 was a turning point in the history of Europe in which the  Single  European  Act  was  signed  by  EU  governments. The Act was meant for providing  for  the creation of a single market in which people, goods, capital and services can move freely around the EC. But are they the real objectives of transforming the EC to EU?

It was widely accepted that the Treaty of Nice has failed to deal with the basic question of wide-ranging institutional reform, the European Union institutions being widely viewed as overly complicated, and hence the establishment of the European Convention, leading to a new IGC (Intergovernmental Conference) in 2004, was agreed at Nice.

Opponents of the Treaty claimed that it was a “technocratic” rather than “democratic” treaty, which would further diminish the sovereignty of national and regional parliaments, and would further concentrate power into a centralised and unaccountable bureaucracy. They also claimed that five applicant countries could have joined the EU without changing the EU’s rules, and that others could have negotiated on an individual basis; something opponents to the treaty argued would have been to the applicants’ advantage. They also claimed that the Treaty of Nice would create a two-tier EU. Opponents pointed out that leading pro-treaty politicians had admitted if referendums had been held in countries other than Ireland, it would probably have been defeated there as well.

Nationalism and national sovereignty have no place in the new EU which is totally different from the original Treaties  of  Rome of the EC. With such plans it is very obvious that big economies in Europe are the only masters and winners in a vast European superstate.